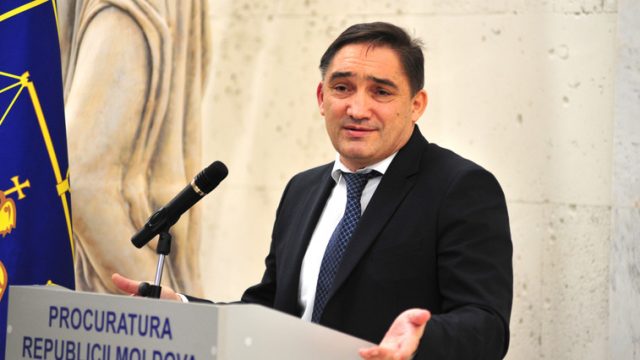 Iurie Perevoznic, one of the suspended deputies of the general prosecutor, Alexandr Stoianoglo and which recently was suspended from office, publicly confirms that the head of the Prosecutor’s Office violated the law when he ordered the payment of former PCCOSC chief Nicolae Chitoroaga with 300 thousand lei when he left the prosecution system, contrary to law. The statements in this regard were made today, October 6, during a press conference organized in support of Stoianoglo. However, as an argument, Perevoznic claims that the signing of the order was “a technical error” and that as soon as he found out about this violation, he was ordered to return the money granted to Chitoroaga, which would have occurred in mid-September. This in the conditions in which the SafeNews.md editorial office has covered the subject since May 2020, sending requests for information to the Prosecutor’s Office.

The SafeNews.md news portal was the one that in May 2020, wrote about the fact that although he was suspended from office, after being indicted with a criminal case on his name, the former head of the PCCOCS, was released from the prosecution service at his own request. Moreover, he also received a single severance pay of over 272 thousand lei.

Subject that the General Prosecutor’s Office avoids talking about. Although safenews editorial office requested through an official request, addressed to the General Prosecutor’s Office, that the copy of Chitoroaga’s release order be presented to us, the representatives of the institution ignored the subject. So no response was received. Analyzing, however, the declaration of assets and personal interests submitted to Chitoroaga, it indicates that after his resignation he still chose the single allowance. Neither more nor less, Chitoroaga received 272,935 lei.

About a year later, on July 19, SafeNews.md editorial office managed to obtain the order signed by Stoianoglo, which the General Prosecutor’s Office avoided making public.

Thus, the respective order demonstrates the fact that Alexandr Stoianoglo, occupying the position of general prosecutor, clearly violated the law. Or, according to paragraph (5) of art. 62 of the Law on the Prosecutor’s Office, it is indicated that: “If, at the date of dismissal of the prosecutor, there is a contravention procedure in connection with the exercise of his duties or a criminal investigation against him, the payment of the above to the irrevocable settlement of the case. In case of finding the guilt of the prosecutor in these cases, the indemnity is not granted. ”

Therefore, following the signing of that order, Alexandr Stoianoglo allegedly prejudiced the state with an amount that according to art. 126, would be in large proportions.

Sources SafeNews.md confirmed for our editorial office that indeed, the money illegally offered to Nicolae Chitoroaga would have been returned to the institution, on September 16, 2021 – cash. But we can see that this fact would have occurred about two years later, and not immediately after the violation was found, as Perevoznic claims, in Stoianoglo’s defense.

We specify that the suspended general prosecutor, Alexandr Stoianoglo, was detained yesterday for a period of 72 hours in a criminal case started on 4 charges: abuse of office, exceeding official duties, passive corruption and giving false statements before competent bodies.

A brief documentation of the Criminal Code, makes us understand that the actions of Prosecutor General Alexandr Stoianoglo, related to the signing of his order could fall within the provisions of Article 328. Therefore Alexandr Stoianoglo is fit to be held accountable, at least for exceeding the duties on duty.

Article 328. Excess of power or exceeding of service attributions

(1) The act by a public person of actions that clearly exceed the limits of the rights and attributions granted by law, if it has caused damages in considerable proportions to the public interests or to the rights and interests protected by law of natural or legal persons, is punishable by a fine of from 650 to 1150 conventional units or imprisonment for up to 3 years, in both cases with deprivation of the right to hold certain positions or to exercise a certain activity for a term of 2 to 5 years .

(11) The unfounded refusal to issue the permissive act which led to the restriction of the right to carry out the entrepreneurial activity, including the unfounded conduct of some controls, if it caused damages to the rights and interests protected by law of natural or legal persons. at least 10 average monthly salaries per economy forecast, established by the Government decision in force at the time of the act, shall be punished by a fine from 1200 to 4000 conventional units or by imprisonment for up to 6 months, in both cases with deprivation of the right to hold certain positions or to exercise a certain activity for a term of 2 to 5 months.

(2) The same accompanying actions: b) the application of the weapon; shall be punished by imprisonment from 2 to 6 years with deprivation of the right to hold certain positions or to exercise a certain activity for a term of 5 to 10 years.

(3) The actions provided for in paragraph (1) or (2): b) committed by a person with a position of public dignity; c) committed in the interest of an organized criminal group or a criminal organization; d) resulting in serious consequences, shall be punished by imprisonment from 6 to 10 years with deprivation of the right to hold certain positions or to exercise a certain activity for a term of 10 to 15 years.