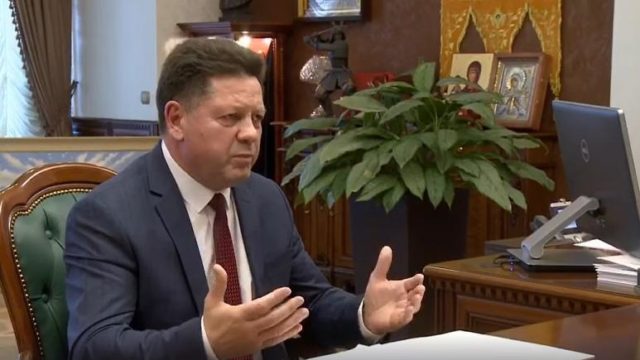 A criminal investigation has been launched in Moldova amid claims an MP was “kidnapped” and “forced to resign” after he defected from the ruling Socialists party.

Pro-Moldova leader Andrian Candu wrote a letter on Thursday claiming his colleague Stefan Gatcan had been “kidnapped, intimidated and forced to resign as a member of parliament”, and had been “taken out of the country” by those close to President Igor Dodon to prevent him speaking about the “inhumane treatment” he had experienced.

This, Candu claimed, came as a result of Gatcan’s announcement earlier in the week addressing his decision to leave the Socialists for Pro-Moldova.

Similarly, Renato Usatîi, the chairman of Our Party, said he believed Gatcan had been removed from the country “so that neither the media nor the law enforcement bodies would have access to him”.

The General Prosecutor’s Office said on Monday it had launched an investigation based on a complaint from Gatcan and the Pro-Moldova party.

Announcing his defection in a Facebook post last Tuesday 30 June, Gatcan, a doctor by profession, detailed his frustration with the government’s “total lack of progress and effective measures” in the medical system amid the coronavirus pandemic.

He said Pro-Moldova was instead “fighting for the interests of the citizens and the country” and that he felt the “latest actions and initiatives, especially in the social field” represented him “fully”.

This departure from the pro-Russian party is the first defection that local reports say could significantly weaken Dodon’s government if others follow suit – stemming worries the Socialists could lose a potential no-confidence motion.

On the same day of Gatcan’s announcement, Socialist MP Corneliu Furculita posted his own statement to Facebook, saying he had spoken to the prosecutor’s office about alleged corruption by the defector.

The following day – when Gatcan had allegedly been kidnapped – Furculita posted a further update that appeared to show another signed resignation letter from the obstetrician-gynaecologist.

He said in the caption that Gatcan had promised to remain a part of the Socialist party, but would be stepping down from his role altogether to dedicate himself to a career in medicine.

By Thursday, Furculita had posted a video that he said he received from Gatcan himself, showing the physician standing in front a light background, assuring the camera he is fine.

“He repeatedly informs us that he is fine, he has voluntarily resigned as a deputy, but he needs a short rest period,” Furculita wrote in the caption.

Local reporters have, so far, managed to trace the video back to a channel on Telegram controlled by another Socialist deputy.

The General Prosecutor’s Office said on Monday it was investigating the circumstances of the complaint.

“Yesterday, the General Prosecutor’s Office received the complaint of the deputy Ștefan Gațcan regarding the alleged pressures and intimidation from certain persons in order to determine him to resign,” said a statement on its website.

“Based on the deputy’s complaint, but also on the approach of the Pro Moldova Party, the General Prosecutor’s Office launched a criminal trial today in which all the circumstances of the case are to be established.”

The Moldovan government and national police force have not responded to Euronews’ request for comment on the matter.

In a further email to Euronews, Candu said the video raised “many question marks” as he felt Gatcan looked “scared, terrified, pushed to the wall, covered with a mask and reading a text”.

He added that he believed Gatcan was currently being held in Romania and called upon local authorities to help.

Euronews has reached out to the Romanian police for comment on the matter.