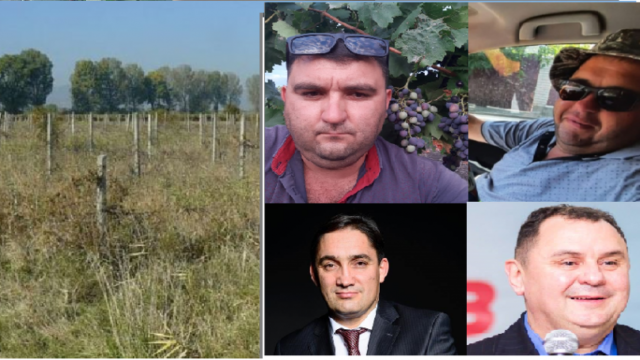 Two businessmen from Comrat, Vitalie and Vasile Aladov, were sentenced, at the end of last year, to hard years in prison for hooliganism. The two claim that their problems started after the appointment of Alexandr Stoianoglo as head of the General Prosecutor’s Office. The conflict is because of about 2,000,000 euros, an amount that the cousin of the general prosecutor, Serghei Stoianoglo, deputy head of department in the administration of Gagauz autonomy, would owe to their family. Alexandr and Serghei Stoianoglo reject the accusations and say that the Aladov brothers are criminals. On the other hand, the way the Aladov brothers’ file was handled raises questions, SafeNews.md reports with reference to anticoruptie.md.

Who they are and why the Aladov brothers are accused Vitalie and Vasile Aladov are well-known businessmen in the Gagauz autonomy.

They founded several companies that own a poultry farm, a wine processing and bottling plant, hundreds of hectares of vineyards and arable land. In 2019, Vasile Aladov entered the race for the position of head of Gagauzia, but his name was withdrawn from the ballot paper in the last hundred meters on the grounds that irregularities were found in the lists of signatures for the candidate’s registration.

On August 21, 2020, the Aladov brothers were detained, and the alleged crimes, according to the indictment, were allegedly committed on August 18 and 19, 2020.

The Gagauzia prosecutor’s office accused the Aladov brothers of mass robbery with considerable damage, death threats and aggravating hooliganism. The case includes 11 injured parties, 10 of whom are police officers. They demanded from the two businessmen moral damages of hundreds of thousands of lei.

The most, 250 thousand lei, claims Nicolai Tomailî, the chief of police from Gagauzia, who claims that Vitalie Aladov threatened him with death. In fact, there are older misunderstandings between Tomaili and Aladov. At the Comrat Court, a civil case is being examined, based on Tomaili’s complaint, requesting the collection of the moral damage from Vitalie Aladov.

The robbery in the vineyard

The main accusation brought by the prosecutors to the two businessmen is that of robbery. The “considerable” material damage in the case of the Aladov brothers consists of 196 trellis (an architectural pilar that is normally made to support and display climbing plants, especially shrubs), estimated at 4,900 lei, extracted by the workers employed by Aladov from an old vineyard. The businessmen bought and rented several shares of the respective vineyard and decided to clear it. On the eve, one of the brothers called a contractor who leases some shares from the respective vineyard and informed him that he intends to start the deforestation works of vineyard.

Ironically, Vitalie and Vasile Aladov confused the lands and started deforestation on the neighboring land. The entrepreneur called the police and so the two brothers were charged with robbery.

What is the particularly serious hooliganism in Comrat

The misunderstandings over the trellis did not end here. While Aladov’s workers were clearing the vineyard, the owner called the police, as well as his relatives, to persuade the businessmen to withdraw from the land he had leased. The brothers, confident that it was their lot, refused to do so.

The accusations brought against the businessmen are flowing – they expressed themselves with uncensored and offensive words, they created a road accident situation and damaged the police car, they slapped a relative of the neighbor, they broke the wheels of a car and a motorcycles. The Aladov brothers claim in one voice that everything was staged for them to fall into the trap.

A video recording from August 18 surprises Vitalie and Vasile Aladov as he explains to the police what their lands are and presents them with documents. The police ask them to stop the works, but Aladovii refuses. They propose to the police to show them the cadastral map of the lands and to go together to the landregistry to clarify the situation.

For these actions, Vitalie was sentenced to seven years in prison and Vasile to six.

Article 287. Hooliganism
(1) Hooliganism, ie intentional acts that grossly violate public order, accompanied by the application of violence against persons or the threat of such violence, the opposition of violent resistance to the representatives of the authorities or other persons who end the hooligan acts, as well as the actions that, through their content, are distinguished by a special cynicism or impudence, shall be punished by a fine of from 550 to 1050 conventional units or by unpaid community service from 180 to 240 hours, or by imprisonment for up to 3 years.
(2) The same action committed:
a) by a person who has previously committed an act of hooliganism;
b) by two or more persons
c) on the territory or within a public or private medical institution. shall be punished by a fine in the amount of 750 to 1350 conventional units or by imprisonment for up to 5 years.
(3) Aggravated hooliganism, ie the actions provided for in paragraph (1) or (2), if they were committed with the application or attempted application of a weapon or other object to the detriment of bodily integrity or health, is punishable by imprisonment from 3 to 7 years

Vitalie Aladov was sentenced to two years in prison with execution and because he threatened to kill Nicolai Tomaili. From the accusation submitted by the prosecutors to Vitalie Aladov, it results that he telephoned Tomailî on his cell phone, introduced himself and threatened him with physical extermination if he filed a criminal case against him. Then, in the evening, she came to his house, knocked on the gate, including with her foot, and then left. Tomaili also said he was home, but was afraid to open it and thought the threats were real.

As evidence, the police from Comrat invoked the fact that Aladov called the chief of police and the statement of two witnesses who allegedly saw Vitalie Aladov near Tomailî’s household, as well as the trace from the businesman’s sneakers left on the gate. As for the audio recording of the phone call, it is missing.

Vitalie Aladov admits that he called him and went home to Tomaili.

Gheorghe Aladov claims that Nicolai Tomailî is indebted to Alexandr Stoianoglo and that he fulfills his orders for the manufacture of the files. Nicolai Tomailî was reserved in statements.

Article 155. Threat of murder or serious injury to bodily integrity or health

The threat of manslaughter or serious injury to bodily integrity or health, if there is a danger of such a threat, shall be punished by a fine of from 550 to 750 conventional units or by unpaid community service from 180 to 240 hours, or by imprisonment from 1 to 3 years.

“The file is made to order by Alexandr Stoianoglo”

Vitalie and Vasile Aladov claim in one voice that the case was fabricated at the request of the general prosecutor, Alexandr Stoianoglo.

Gheorghe Aladov, the father of the two imprisoned businessmen, told us that he is a relative of the Stoianoglo family, that they were on good terms and even had a common business.

He also presented us with some debt rescheduling contracts, signed by him and Serghei Stoianoglo.

Prosecutor’s warning in the case

Alexandr Vlah, the prosecutor who handled the Aladov case, claims that the two brothers deserve to stay in prison and rejected the involvement of general prosecutor Stoianoglo.

Serghei Stoianoglo is the deputy head of the general directorate of youth and sports in ATU Gagauzia.

In the State Register of Enterprises, the name of the official appears as administrator and founder of several enterprises, including the Burlacu-Vin factory in Cahul, which is in insolvency proceedings. However, the official appears very poor in the declaration of wealth and personal interests, which indicates only a house in a village. As for companies or debts, there aren’t any.

The debt claimed by the Aladov family does not seem to be the only one that the official would have. Farmers in Burlacu village, Cahul district have repeatedly complained that they sold grape fruit to Stoianoglo’s factory, but did not receive any money. The debt to grape suppliers exceeds the amount of 650 thousand lei. At the same time, the Gagauz press announced last autumn that Stoianoglo’s companies owe over 400,000 lei to the local budget.

Sergei Stoianoglo rejects the accusations of the Aladov family and claims that he paid the debt, and his cousin has no attribution.

We also asked him to tell us if he knew about the alcohol business of his relatives and the Aladov family. The answer came shortly after the Comrat court convicted the two businessmen.

The document shows that Vasile and Vitalie Aladov are accused of committing six episodes of robbery with considerable damage, aggravated hooliganism, the threat of murder or serious bodily injury and that the businessmen were convicted.

Alexandr Stoianoglo refused to answer our other questions, citing that “the Prosecutor’s Office, including its leadership, does not comment on rumors, gossip, political statements and other forms of manifestations of freedom of expression.” At the same time, the General Prosecutor’s Office drew our attention to “responsibility for the veracity of the information disseminated, as well as the procedures provided by law on how to notify law enforcement about the commission of crimes, the presentation of evidence and their verification.”